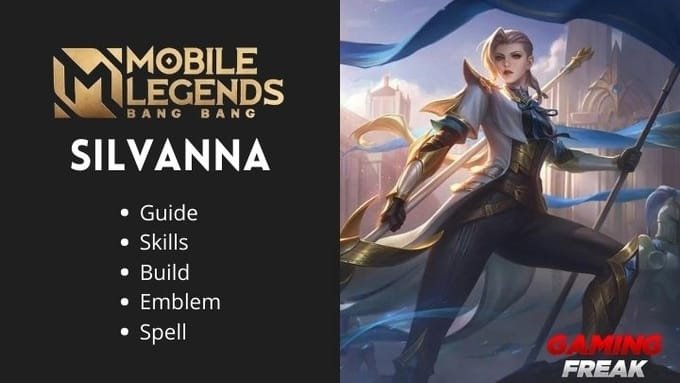 Mobile Legends Silvanna is a very versatile character in the game. She can Tank for her team; be the Hyper Carry for her team; and can also be played as an Offlaner.

So make sure to check these hero guides as well. For now, let’s focus on Mobile Legends Silvanna Guide 2021.

Silvanna is played in Experience Lane as Offlaner mainly.

She can also take up Hyper Carry role or be played in the Middle Lane along with Support as a Tank.

Tank Silvanna works because of her Passive and Ultimate along with her Skill 2 which provides shield and sufficient Lifesteal.

She can easily trap enemy main damage dealer and allow your team to have a successful gank.

Silvanna deals Magic Damage in all of her Basic Attacks.

She can apply a mark on all the enemies which can reduce their Physical and Magical Defense by 3 – 6 which lasts for 5 seconds.

A maximum of 5 stacks can be applied to any target.

At the maximum stacks, Silvanna can deal 30% extra damage to her enemies.

Silvanna hits her Lance in the designated direction. If it hits any enemy then the first enemy is stunned for 1 second.

After a successful hit, Silvanna gains a dash which can be used in the designated direction.

While dashing, Silvanna will strike again with her Lance.

This skill can be used to initiate or run away from a fight.

Silvanna attacks with her lance in the designated direction by spinning it.

She spins it for a minimum of 6 times. Number of spins can be increased by gaining more Attack Speed.

Each spin deals Magic Damage to enemies and generates shield for herself.

Silvanna deals 50% less damage to Minions with this skill.

Silvanna jumps in the designated area dealing Magic Damage to all the enemies in the area.

If Silvanna has locked onto any target or the target closest to the center of this Skill will get locked inside the circle of this Skill and cannot escape from it for 3.5 seconds.

If Silvanna is standing inside the circle, then gains 100% Attack Speed and Magic Lifesteal which increases based on the Level of the Skill.

Silvanna has an amazing Ultimate which prevents One Enemy in particular to not escape and be trapped for 3.5 seconds.

This way you can effectively initiate a fight by trapping the main damage dealer with her Ultimate.

This way you apply a total of 4.5 second of Crowd Control Effect which makes sure that you or your allies can deal finishing blow.

Constantly use Skill 1 and Skill 2 to Harass enemies and force them to recall.

Use Inspire or Petrify to give Burst Damage or surprise Crowd Control Effects to enemies.

Execute – It deals extra damage which increases if enemy has lower HP. Securing a Kill will reduce the cooldown of this skill.

Thank you everyone for reading. This post was about all the things you should know for the Mobile Legends Silvanna.

I have tried my best to include each and everything regarding Mobile Legends Silvanna in this article.