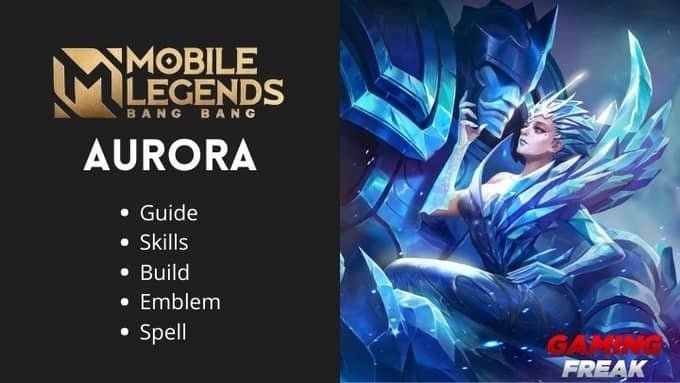 Mobile Legends Aurora is one of the best Mages in the current meta. With the new changes in her passive, it has become even more easier to have better crowd control over enemies.

Aurora is also very useful when in delaying and annoying Enemy Hyper. Her continuous freeze will delay the farm drastically and also gives your team the opportunity to have an early gank.

So make sure to check these hero guides as well. For now, let’s focus on Mobile Legends Aurora Guide 2021.

Aurora is played in Middle Lane as Support for Hyper Carry.

Aurora has a stack based passive which can freeze all of her enemies when the passive is active.

She gains her gains her stacks only when she uses her Skills. Each cast of the skill will give her a stack of Passive.

Aurora gains a maximum of 3 Stacks which gets reset after using the passive ability.

Aurora has 20% extra damage on any frozen target.

Aurora shoots an Ice Missile in the designated direction.

It deals Magic Damage in Area of Effect Manner. It also slows down the enemies hit by 25% for 1.5 seconds.

Aurora will hit a specific target with her ice magic. It will slow down the target by 80% for 1.5 seconds and deal Magic Damage.

When passive is active, this will freeze only your target and deal 20% extra damage.

Aurora casts her spell and summons a giant ice meteor which can hit in the designated direction.

This skill deals Magic Damage in the Area.

Since Aurora has an amazing Ultimate Skill which provides Crowd Control Effect to all the enemies.

This way you apply a total of 2 to 3.5 second of Crowd Control Effect which makes sure that your allies can deal finishing blow.

Use Flicker to give surprise Crowd Control Effects to enemies only if you can easily escape from fight.

You can also delay enemy hyper by directly ganking their Buff. As it has become easier to activate passive.

Save your Flicker to escape, as Aurora doesn’t have any dash skills.

Flameshot – It shoots a Magic Arrow which deals higher damage with increased distance.

Thank you everyone for reading. This post was about all the things you should know for the Mobile Legends Aurora.

I have tried my best to include each and everything regarding Mobile Legends Aurora in this article.

Why Rummy Is Considered a Skill Game

How to Play Fantasy Cricket: A Complete Guide for Beginners