Kagura is one of the hardest and trickiest Hero in the game. If you manage to master her timings and combos, then you can win almost every game.

Even your Win Rate with Kagura will shoot up to 85%.

Kagura is played as Mage as well as Support. Both of her roles are played in the Middle Lane.

How to Use Kagura Skills?

Kagura has Two Sets of Skills.

Whenever Kagura will take her Umbrella back, she will get Shield. She will also stun and slow down nearby enemies.

Both sets of Skills work in the same manner.

Kagura will throw her Umbrella and deal damage to her enemies. On hitting an Enemy, it will slow down the Enemy.

Blue Set Skill: Kagura will dash away from her Umbrella. Umbrella stays in your position. It will also remove any kind of Negative Effect on Kagura applied by the Enemy.

Purple Set Skill: Kagura will return to her Umbrella and also stun nearby Enemies due to her Passive.

Blue Set Skill: Kagura will deal with damage and also Knock-back nearby Enemies.

Purple Set Skill: Kagura will use her Umbrella to create a Link between her Umbrella and Enemies. If the link is maintained for 3 seconds, then all Enemies under Link will be pulled towards her Umbrella.

This is the most common and effective Skill Combo. Many professional players use this combo.

Mage emblem is the only emblem that should be used on Kagura. Since Kagura has the capability of giving Support and dealing with Burst Damage at the same time kagura emblem. 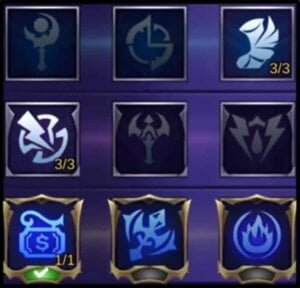 Kagura when played as Support should take Execute because your Item Build will focus on Supporting your Allies instead of Damaging.

So, many times your Enemies might escape. Execute helps in successfully getting kills.

When Kagura is played as Main Mage she focuses on Farm in the Early 4 minutes of the game.

Retribution helps in faster Jungling and also due to the Patch Update now Retribution Spell holders get bonus Gold on every Kill or Assist.

So, when you combine it with Mystery Shop then you can complete your build within 8 minutes in the game.

Note: – This build does not Provide any Magic Lifesteal. Kagura doesn’t need Lifesteal as she will be far from fights and generally doesn’t take any damage from enemies. Kagura usually One-Shots Enemies.

That’s all for this article. Thank you everyone for reading. This post was about all the things you should know for the Mobile Legends Kagura.

I have tried my best to include each and everything regarding Mobile Legends Kagura in this article. 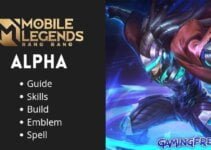