Welcome to MLBB Hero Guide Tutorial. In this post, I’m going to show you How to Use Chou in Mobile Legends.

MLBB Chou Strength & Weakness and finally give you some Tips and Tricks, How to Play With Chou 2021 Effectively.

So are you Ready to know about Chou Moba? 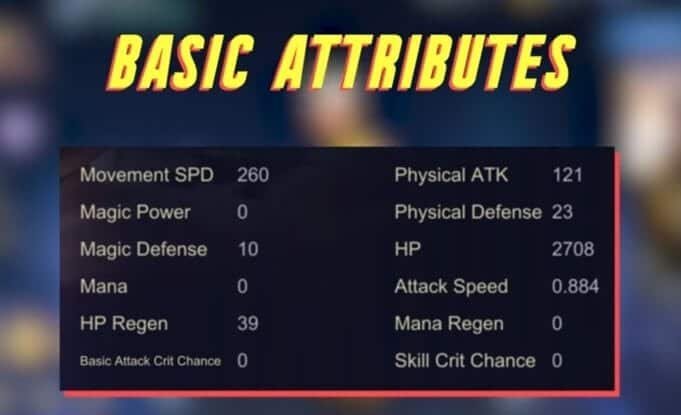 After travelling 8 yards (by walking or using skills), Chou’s passive will be triggered. When his passive is ready, his hands will start to glow.

When his passive is triggered, his next basic attack will deal extra damage and slows down the target. This Enhanced Basic attack can’t critical strike.

His skill 1 totally has 3 phase, all phases are short dashes and deals physical damage. He can move through some walls using skill 1.

This is a short dash skill. He can go through most walls using this skill. While casting this skill he gains a shield based on his physical attack, lasts 2 secs.

After dashing, he gains 40 points of Physical Penetration which allows him to deal more damage for 2s. During the dash, Chou will be immune to CC effects.

Skill 3 – The Way of Dragon

His ultimate has 2 phases, First Phase deals damage and Knocks back the enemy. After first phase, you can tap this skill again to chase and deal continuous damage.

If you tap this skill again immediately after using first phase, it will result in a short kick. For longer kicks, wait for a brief time before using the second phase.

That’s all for his Skill explanation.

Flicker is the best spell to use on Chou. You can surprise ultimate enemies using Flicker.

Use Killing Spree Or High And Dry Talent Both Are Good For Damage Chou emblem. If you’re using Tank Build Choose Tank Emblem for chou. Use The Talent Points On Hit points And Cd Reduction.

Use Brave Smite Talent It Will Reagan HP Every time You Cc An Enemy emblem chou. 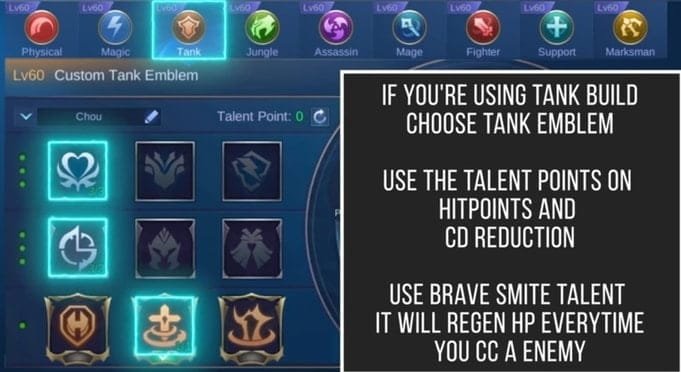 If you want to play Best build Chou 2021 as Tank/Support you can use this best build for chou 2021.

If you’re a beginner Chou, start practicing these combos. These 2 combos are easy to learn. Master both before moving on to other combos.

That’s all for this How to Play Chou in Mobile Legends guide, tutorial, hope you guys learn it and love it. Please comment if you want more tutorial like this.