MLBB Thamuz Strength & Weakness and finally give you some Tips and Tricks, How to Play With Thamuz 2021 Effectively.

So are you Ready to know about Lord Lava “Thamuz”?

We have previously discussed How to master playing with other Mobile Legends, Heroes like Leomord, Harith, Khaleed, Carmilla, Atlas, Luo Yi, Claude, Kimmy. So make sure to check these hero guides as well. 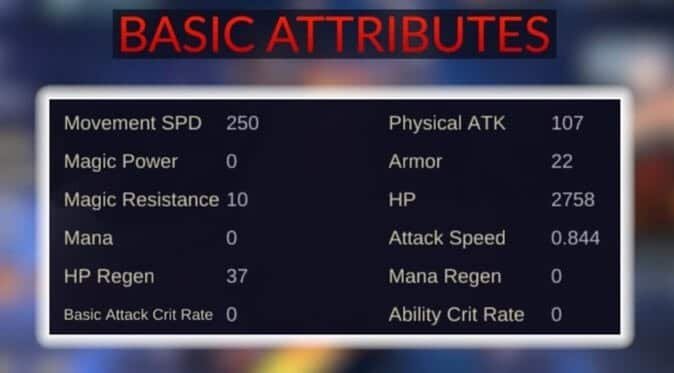 When Thamuz attacks a target with his scythes, it leaves a scorch affect which deals continuous physical damage.

It also creates a gush of lava which explodes after 2 secs while exploding it will deal physical damage to enemies nearby.

He will throw his scythes in a direction; it starts to move slowly after hitting the enemy or after travelling some distance.

It also deals continuous physical damage and slows down the enemy, only the first hit deals high damage after some time.

The scythe travel back to Thamuz, it will pull enemies in its path, he can also retrieve the Scythe, by getting near to it or moving far away from it.

This is his only Blink skill, it deals physical damage and slows down enemy this skill can also be used to retrieve back his Scythe.

Using this skill will increase his attack speed and each basic attack will regen 2.5% of his max.

HP and the skill it deals physical damage to nearby targets every 0.5 secs, it lasts for 9 seconds that’s all for his Passive & skills.

I highly recommended you to use “FLICKER” for him it will be very useful to escape, since he has only 1 blink skill.

You can also use “AEGIS“, it will be very useful in 1v1 situations “RETRIBUTION” can also be used, but even without retribution he can farm really fast.

Use “Custom Fighter” Emblem Use Talent Points On HP And Physical Attack Use “Disabling Strike” Talent. It Will Add Extra Slow Effect To His Skills best emblem for thamuz 2021. 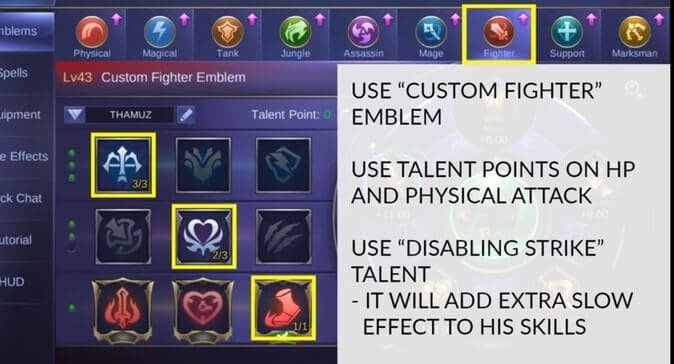 Use “Common Physical” Emblem If You Haven’t Unlocked “Fighter” Use Talent Points On HP And Physical Attack Use “Open Fire” Talent It Will Increase Physical Attack After Using A Skill emblem for thamuz. This is my recommended mobile legends thamuz build 2021. I choose to add 2 defense items because, he passive and skills doesn’t give his defense thamuz item build 2021.

Also giving him HP items is good because, in Ultimate state his each basic attack gives him 2.5% HP now, let’s look at his replacement items.

If you are laning against mages get “TOUGH BOOTS if you like extra movement get “RAPID BOOTS” for full attack build replace these items Against lifestealer heroes best build thamuz 2021.

Use “DEADLY BLADE For more Crit. Hits buy “SCARLET PHANTOM you can try items on your own, but, I recommend you to have at least 2 defense items.

One of his biggest strengths is skill 1, with that he can be really aggressive in early game his skill 1 CD is very low.

You can spam it while laning to get easy kills also his skills have a lot of slow down effects. This will be really useful to poke enemies and all his skills are AOE damage.

So it will be very useful in team fights. He also has some weakness, His passive and skills.

Only meant to attack, he lacks defense, which makes him a squishier target and his skills only has slow down effect, he doesn’t have any disabling skills.

If you are looking for Minecraft game, check below articles for beginners guide.

That’s all for this How to Play Thamuz in Mobile Legends guide, tutorial, hope you guys learn it and love it. Please comment if you want more tutorial like this.