Welcome to MLBB Hero Guide Tutorial. In this post, I’m going to show you How to Use MLBB Khaleed in Mobile Legends.

MLBB Khaleed Strength & Weakness and finally give you some Tips and Tricks, How to Play With Khaleed 2021 Effectively.

So are you Ready to know about Desert Scimitar “Khaleed”? 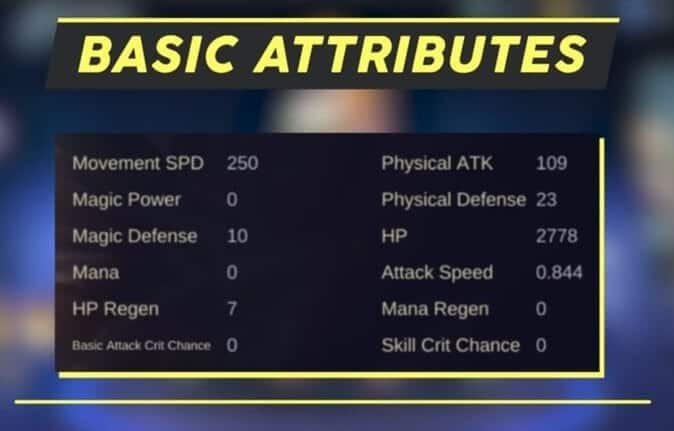 Khalid’s energy bar starts to fill slowly when he moves. The energy starts to decrease if he stops moving.

When his energy bar is full, his movement speed will be increased by 25% and his next basic attack is enhanced.

This enhanced basic attack has longer range, it also deals damage to targets behind. This basic attack deals more damage than normal attack, but it cannot deal critical damage.

This attack leaves a pool of sand for 2s. Enemies walking on the sand pool will be slowed by 25%, while Khaleed gains 25% movement speed on it.

Khaleed deals damage to enemies around him, If this skill hits a target he will dash in the direction of joystick.

You can delay each cast by not moving the Joystick. You can basic attack or use other skills in-between. This skill only deals 50% damage on Creeps/Minions.

This skill regens HP and Energy. This regens based on HP lost. So, if you’re low on HP, it will regen more HP. During this skill, the damage taken will be reduced by 50%.

This skill lasts for 4s. Enemies passing through this skill will be slowed by 60%. Getting CC’ed, Using other skills or moving will cancel this skill.

During this skill, Khaleed with being immune to CC. That’s all for his Passive & skills!

Flicker works well on khaleed spell. You can use it to gap close when your ultimate is on CD or to escape.

You can also use Purify against high CC enemy heroes.

Use Fighter Emblem on best emblem for khaleed Use the Talent Points On Physical Attack and Physical Penetration, Use Festival of Blood Talent It Will Increase His Spell Vamp khaled emblem. 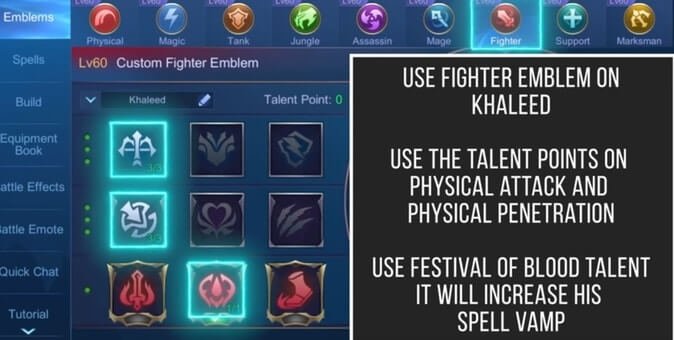 This is my recommended khaleed mobile legends build 2021.

You can also build Raptor Machete early game and replace it for something better after completing the khaleed build 2021.

The enemy is within Skill 1 Range

If Enemy Is Within Enhanced Basic Attack Range.

If the enemy is far Away.

That’s all for this How to Play MLBB Khaleed guide, tutorial, hope you guys learn it and love it. Please comment if you want more tutorial like this. 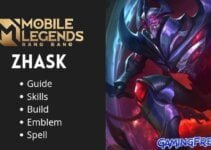