How to Use Mobile Legends Wanwan Skill 1 Swallow’s Path

How to Use Mobile Legends Wanwan Skill 2 Needles in Flowers

How to Use Mobile Legends Wanwan Ultimate Crossbow of Tang 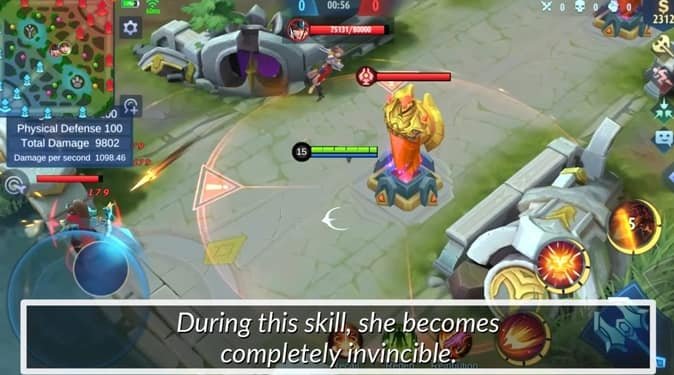 Inspire – works really well on Wanwan. Using inspire with ulti will increase the arrow she shoots.

Aegis– Use Aegis to increase her survivability and for a aggressive play style.

Retribution – You can also use retribution to help her farm faster early game. Start the match, with a level 1 Jungling item. Take any one of the side lanes, go mid-lane only if there is no assassin or mage mid laner hero in your team. Your skill 1 has a very long range, use it correctly to harass enemies while laning. Use bushes to aim your skill 1 properly and try to trigger the stun effect. If your enemies aren’t careful you can pick up easy kills early game in this manner. As a Marksman farming should your main objective early game.

Try to stick to lane and focus farming. While farming and clearing waves don’t move around with your joystick. Dashing animation will add a delay between your attacks. There’s a trick to use your dashing passive even without any target. Here’s how to do it.

How to Use Wanwan Infinite Dash Trick

This trick doesn’t make you move that faster, but still it’s pretty fun to use. You can use this trick to dash through walls. Wanwan is very strong against melee heroes, if you’re being chased by one. Use your passive to dash out of their attack range. When fighting against CC heroes, always wait for the right moment to use skill 2. It could determine the outcome of the fight.

That’s all for this How to Play Wanwan in Mobile Legends guide tutorial, hope you guys learn it and love it. Please comment if you want more tutorial like this.